This year’s J.D. Power & Associates’ Canadian discount brokerage rankings were recently announced. As with years past, the rankings and the underlying survey they’re based on, provided a unique window into the collective voice of Canadian self-directed investors and their perceptions of Canada’s online discount brokerages. In the first of our multi-part special series on […]

This year’s J.D. Power & Associates’ Canadian discount brokerage rankings were recently announced. As with years past, the rankings and the underlying survey they’re based on, provided a unique window into the collective voice of Canadian self-directed investors and their perceptions of Canada’s online discount brokerages.

In the first of our multi-part special series on this year’s discount brokerage rankings, we take a look at the survey that produces the rankings, including how it measures investor satisfaction as well as some of the unique features of this year’s survey and results.

The next part of our series will drill down into the actual performance of Canada’s brokerages on this year’s ranking and what these results mean for the online brokerages as a whole as well as self-directed investors.

A Quick Recap of the 2014 Canadian Discount Brokerage Rankings

When it comes to the various Canadian discount brokerage rankings, the J.D. Power & Associates evaluation occupies a special niche. Unlike other rankings that focus on direct evaluation of features, the J.D. Power ranking of Canadian brokerages is unique because its is the based on the systematic organization of opinions, experiences and perceptions of discount brokerage clients – what they call the “voice of the customer”.

Between mid-May and mid-June of this year, the Investor Satisfaction Survey polled just over 2500 clients from a number of Canadian discount brokerages to find out just how satisfied (or dissatisfied) these investors were with their current online brokerage. In total, 7 Canadian discount brokerages ended up having sufficient data to participate in the rankings (compared to 11 last year), with an average investor satisfaction score of 736 (compared to an average of 724 last year).

The firms covered in this year’s ranking (along with their overall investor satisfaction score) are shown in the chart below. 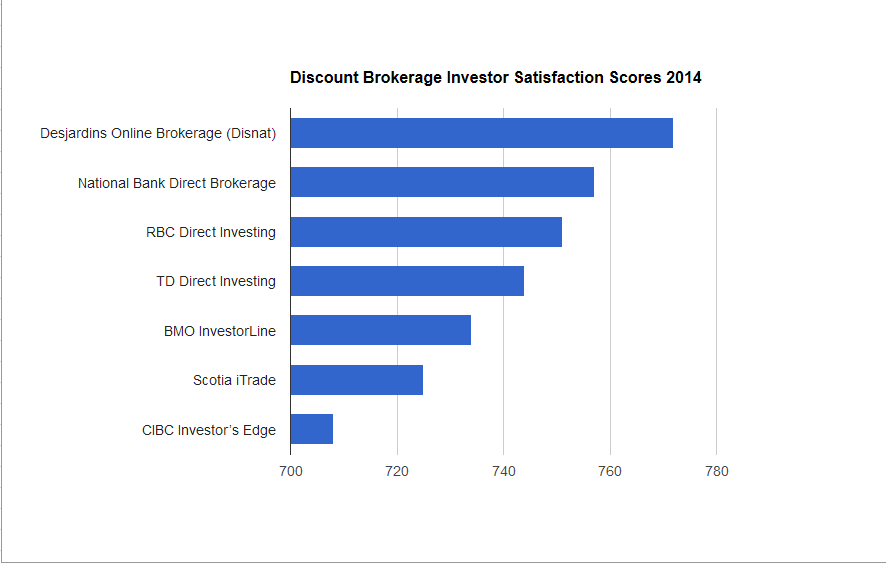 While numbers help to make the assessment and ranking easier, the process behind how these numbers are generated is actually fairly complex.   (For those who want a more detailed explanation of the survey and scoring system, click to read our overview on the J.D. Power Investor Satisfaction Survey here)

It is useful, however, to get a quick sense of how these numbers are derived to better understand what they mean.

The definition of “investor satisfaction”, according to the survey methodology, is actually comprised of the following six factors (shown in descending order of importance to the score):

Given the distribution of the weightings, firms that perform well in the first three categories are probably going to outrank firms that may offer a lot of features, resources or are adept at resolving customer concerns. This is important to consider when reviewing the rankings because the survey is not necessarily a measure of “good” firms vs. “bad” firms, or the “lowest cost” vs. the “most expensive”, but rather how satisfied a particular firm’s clients are with their particular provider on key components.

Your Mileage May Vary

The decision to define and weight the categories in the way they have been structured is the result of extensive statistical analysis and testing. J.D. Power’s professional research team has identified an optimal mix of factors that can help account for a typical user’s experience of “being satisfied” with a particular discount brokerage brand.

One of the important limitations of any survey approach, or any approach that uses “averages” is that the numbers tend to draw a “line of best fit” through different categories of user. What this means for investors is the standard qualifier: YMMV – i.e. your mileage may vary when it comes to the degree to which the survey matches up with any one individual’s experience.

For example, according to the Investor Satisfaction Survey methodology, investors are categorized into the following three groups:

This worked out to about 30% “passive”, 48% “moderately active” and 22% “active” overall however on a firm by firm basis, these weightings were noticeably different.   Thus, scores for firms sampled with more active than passive traders would see their particular scores impacted by investor segmentation.

Highlights from the 2014 Rankings

There are a number of factors about the 2014 edition of the J.D. Power Canadian discount brokerage rankings  that we’ve found to be particularly interesting. Some of these will be covered in greater detail in the next part of this series, however here are some quick highlights of why we think the results from this year provide some really compelling insights into the Canadian discount brokerage marketplace.

Second, this year’s survey took place against the backdrop of a massive pricing shift amongst the bank-owned brokerages. The fact that the survey took place not long after many brokerages dropped their standard commission prices, really helped shine a light on the difference between pricing and perceived value. The substantial shift in pricing may also help to account for the dramatic rise in RBC Direct Investing’s score relative to last year.

Finally, looking at the trends in the data, it is encouraging to see investor satisfaction, as measured by the survey methodology, point upwards. Specifically all of the firms ranked this year scored above 700 which may reflect investors feeling more positive towards the discount brokerages in general or brokerages doing a better job of catering to their clients. The data suggest it may be a bit of both.

While it was unfortunate that so many smaller firms were not a part of this year’s ranking, from what we’ve observed over the past year – and in the time leading up to when the survey was administered, the long awaited benefits of increased competition between bigger brokerages are starting to show up.

In addition to what we saw were interesting trends developing in the data, we also had the opportunity to speak to Michael Foy, director of the wealth management practice at J.D. Power & Associates about what he thought were the most interesting findings and possible trends emerging from this year’s survey. Two points in particular stood out.

First, according to Foy, one of the most interesting findings from this year’s survey was the impact that advice and guidance seem to have on influencing investor satisfaction.

Despite the attention being given to pricing and promotions, which makes sense given the current pricing climate, Foy stated that “developing the right kinds of resources and making their clients aware of them” is crucial to tapping into the kind of support DIY investors are seeking from their brokerage providers.

Second, and perhaps most intriguing, were insights related to price. According to Foy what investors actually paid per trade had “very little correlation at all with their satisfaction.” Instead a much more important driver was whether or not the pricing was actually easy to understand.

This point is particularly interesting given where brokerages that did not lower or simplify commission prices (such as Scotia iTrade and CIBC Investor’s Edge) landed on the rankings relative to those that did. Given the recent move by CIBC Investor’s Edge to drastically lower their pricing and Scotia iTrade’s still holding out on lowering their standard commission fee, it will be interesting to monitor the investor sentiment for these two firms in the year ahead.

The dramatic shift in pricing of commissions has definitely changed the way in which consumers are analyzing their online brokerage choices. While pricing can’t be ignored, firms looking to do well on the J.D. Power Investor Satisfaction Survey and with their customers in general are going to have to pay attention to other parts of the customer experience.

Ultimately, regardless of the weights or statistics, the survey tracks the thing that matters the most with clients: perceived value.

If an individual is assessing a discount brokerage based on no other information other than these particular rankings, they could reasonably infer that discount brokerages that rank higher on the Investor Satisfaction Survey have clients that are more likely to be satisfied, especially with respect to the touch points with the firm and the way in which fees are communicated.

Among the different rankings and ratings of Canadian online brokerages, the J.D. Power rankings are relatively more rigorous in terms of their methodology and design. As a result, this is a source that offers a structured way to derive insights about the relationship between a particular online brokerage and their clients.

Individuals looking at the ranking (or any rankings/evaluation) should keep in mind that these numbers reflect a ‘best estimate’ of what consumers are experiencing as measured in a brief window of time. With the industry in such a dynamic state right now, however, those perceptions can shift dramatically because of important changes in the way a discount brokerage does business.

As we will see in the following part of the series, the theme that seems to be emerging amongst DIY investors is a genuine difference between ‘price’ for services and what clients feel they are getting for their money.