For do-it-yourself investors, it certainly feels like slim pickings when looking for tools to help do fundamental research on junior precious metal mining and exploration sector stocks.  Of the research tools and websites that do exist, many are based on technical indicators, ‘black box’ systems or only offer coverage on larger, better-known companies.  More often […]

For do-it-yourself investors, it certainly feels like slim pickings when looking for tools to help do fundamental research on junior precious metal mining and exploration sector stocks.  Of the research tools and websites that do exist, many are based on technical indicators, ‘black box’ systems or only offer coverage on larger, better-known companies.  More often than not, newsletter writers and dense technical research reports are really the only sources of in-depth analysis and ‘filtering’ that investors can access when it comes to junior precious metals companies.

Whether it’s because many of these types of companies aren’t big enough or popular enough with a wide investor base, tracking down quality research tools often involves substantial ‘Googling’, forum hunting, sifting and filtering.  At times mining the investing data feels like almost as much work as mining for an actual mineral or metal itself.

One company, however, is betting that they can help redraw the analysis landscape for investors with their new platform: Tickerscores.

At the Vancouver Resource Investment Conference this past May, Visual Capitalist, a company known for producing mining and exploration sector infographics, rolled out the beta version of their newest venture and potentially game changing stock analysis platform Tickerscores.

Slated to launch in September 2013, Tickerscores aims to help investors interested in mining and exploration stocks crunch important data quickly and deliver it in a visually appealing, intuitive format.  While pricing has yet to be officially determined, the projected subscription range is forecast to be between $25 to $60 per month.

One of the reasons this platform could be a potential game changer for investors is that, unlike many other filtering tools, Tickerscores goes beyond providing lists of junior mining and exploration companies based on price and traditional fundamental ratios.

Instead, the platform integrates information about multiple key areas of a company’s performance, evaluates each of those components and ultimately produces a “score” out of 100 that is then applied to the company.  So far exploration, producing and development companies are being included in the analysis with each category of company receiving slightly different weightings on the components that matter when analyzing their overall ‘health’.

An example of the different levels of importance placed on the management team, market valuation, project dynamics and financials for each category of company can be seen in the table below.

All of the above information is condensed into an informative ‘doughnut’ which provides the numerical score on the inside and colour codes the financial health as well as the management and project scores as additional rings (see below).

Finally the information is plotted on a graph that plots market cap against the category appropriate to the type of company. For example, for producers, market cap is graphed against previous quarters’ production (in ounces) whereas for development companies. 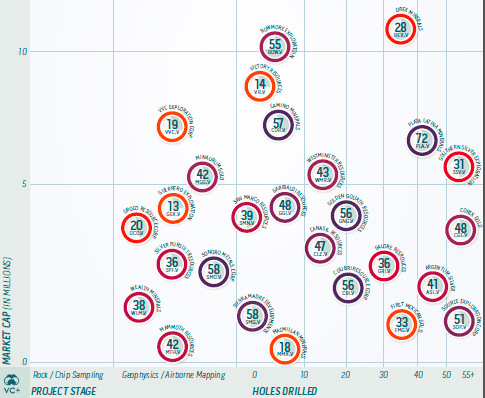 The combination of data and visuals is what makes this an interesting tool for investors and certainly changes the way research on the mining and exploration sector can be done for self-directed investors.  There is a lot of information that is being gathered, analysed, ranked and presented so Tickerscores does a lot of the heavy lifting for investors in terms of analysis.

The Devil is in the Details

While numerical rankings are incredibly seductive, they are also the most contentious feature of Tickerscores.

As with any ranking system, how the rankings are generated is the most critical feature in determining the reliability of those numbers for decision making purposes. In other words, what goes into the ranking determines what the outputted number actually means and whether or not those scores are useful.

Take, for example, the category of “management team” that forms part of the overall score. One of the multiple variables that go into the score for management is teams learning to ramp up production efficiently and control costs effectively.

While many investors would intuitively agree with some kind of positive association between company performance and efficient production pathways or well-controlled costs, defining exactly how much (numerically) it matters is much more complex task. Other components that go into the management score include:

Even though it may seem academic to debate these seemingly small factors, in reality the combined effect of a lot of small factors is exactly what lies at the heart of what could make or break Tickerscores as a valuable research tool – it relies on the combination of many different factors put together to create a numerical and pictorial representation of the ‘strength’ of a particular company.

So what makes a ‘good score’? Typically, higher numbers are the signal of stronger companies however when asked about what constitutes a “good” score, the lead analyst on the Tickerscores project,  Rob Furhman, characterized the value of Tickerscores as “not about [finding] what’s good, but eliminating what’s not good.”

What Tickerscores Means for Investors

For individual investors using this tool, having some idea of the predictive validity (i.e. how well a given Tickerscore predicts financial success of a particular company) is crucial in determining the value of the tool. While backtesting data is limited, the early results tested against the Gold Bugs Index (HUI) and and the Junior Miners ETF (GDXJ) do show some promise in terms of reflecting how the market is also valuing companies with higher Tickerscores (>60) versus those with lower Tickerscores (<40). It will take more time and testing to see whether these results hold water, but it is nonetheless fascinating to see the data and the model starting to complement one another.

Then there are other factors to consider. Each Tickerscore gets generated within a particular economic set of conditions. Interest rates, currency rates, broader market forces and supply/demand for underlying commodities are just some of the factors that substantially impact the valuation of a particular company.  The underlying model looks backwards as well as forwards andas such, the comparability across time diminishes as the interval of time increases. Each time a Tickerscore “snapshot” is generated, it is based on the trailing quarters numerical picture and the economic conditions in which the score was generated as well as the future expectations on the company’s prospects. Further, as more information about the future becomes known, the model needs to update and/or factor in changes to assumptions about the future.

Thus, for users of the Tickerscores tool, it is important to understand that while it may reduce the amount of research time required to ‘spot’ interesting opportunities, due diligence (and therefore time) is still required when looking into particular investment suitability.

At several hundred dollars per year for a subscription, Tickerscores will still have to compete with and establish itself as a research tool in a very competitive research market in which armies of analysts are also wrestling with many of same questions.

What Tickerscores Means for Industry

Of course, anytime any analyst or ranking evaluates companies there are bound to be more than a few eyebrows lifted.

By evaluating all the companies in the junior precious metals space there are bound to be those that, based on their ranking, will either celebrate or criticize the tool.  When the CEO of Visual Capitalist Jeff Desjardins was asked about the impact on those companies being ranked, he stated “I’d rather ruffle a few feathers early on and have people get used to it.”

The success or failure of tools such as Tickerscores rests in large part on the strength of the research and analysis.  For professionals, what’s under the hood (i.e. the model that underlies the analysis) is sure to spur debate and curiousity among analysts and business valuation experts.

As such, more testing and data validation on performance will probably be required in order for analysts to make an informed assessment on the models and how or if they can fit Tickerscores into the suite of tools they typically turn to or would endorse.

Mining and exploration companies are also likely to going to have to be prepared to speak to and understand how these scores will impact investor perception of their company as an investment.

Tickerscores is a natural extension of the data visualization work that Visual Capitalist has been doing for the past two years and is line with a growing trend of data providers making their information more visually appealing.

For investors interested in mining and exploration stocks, there is certainly the opportunity to do their research on a very different kind of platform and for that reason it will probably take some getting used to for many investors.   As with any new technology product there will most certainly be revisions and updates which will hopefully not impact usability as the product goes to launch.

What is clear about Tickerscores is that the platform does have the ingredients to literally redraw the map on how research on junior precious metal mining and exploration stocks gets done. How this platform ranks in the opinions of investors and industry, however, is the metric to pay close attention to in the coming months.

Discover promotions that are best suited to you with our Innovative Deals Wizard.