The scope of this review covers the 11 Globe and Mail discount brokerage rankings published from 2002 to 2012.  Even though the rankings started in 1999, we felt the window we used to be sufficient to explore the recent history of discount brokerages within Canada, and more importantly to illustrate the nature of how the rankings have changed over time.  The data was retrieved by searching for each years’ results via Google, The Globe and Mail website as well as from several websites that contained archived copies of articles. In addition to researching online, we also had the chance to speak to Rob Carrick of The Globe and Mail directly about his experiences in putting together the reviews.

Once gathered, the data was compiled into tables for sorting and analysis. Initially we thought it would be possible to compare scores and how they changed from year to year, however given that the ranking criteria changed so frequently, such a comparison would offer limited value.  Instead, we have included a figure (see next page) that details the criteria for each year and how the criteria have changed over time.  Although it is also of limited reliability, we nonetheless took the historical average rank of each discount brokerage currently referenced in the 2012 rankings which can be seen in the table to be included in part two of this series.

The Globe and Mail Canadian Discount Brokerage Rankings – A Backgrounder

As the longest running ranking of Canadian discount brokerages, The Globe and Mail rankings offer an interesting panorama of the industry and the do-it-yourself investors that they cater to. Over the years, the profile of these rankings has increased substantially to the point that today these rankings are widely anticipated by both investors as well as by discount brokerages.  The recognition associated with being labeled “the best discount brokerage” is important for the marketing strategies of the high achieving companies as well as for Canadian investors who use the ratings as part of their product research and comparison.

As with previous reviews of surveys and rankings, it is important to put The Globe and Mail rankings into context to understand what they do and do not measure, so that Canadian investors can make better informed decisions based on the results these rankings generate.

How the Discount Brokerage Rankings are Made

These rankings are performed by Rob Carrick, a personal finance columnist with The Globe and Mail, and cover a range of items that may be of interest to “mainstream investors”.   The process begins with a survey that is sent to all the Canadian discount brokerages profiled. According to Carrick, the combination of reader surveys, conversations, feedback and interactions he has had with many Canadian investors have helped to paint a portrait of features and services that he believes reflects the components most relevant to average do-it-yourself investors.  These features and components then make their way into the survey that goes to the discount brokerages, with the survey having anywhere between 50 to 100 questions.

The next step involves actually going through the brokerages websites and services himself, often via demo accounts.  By going through each discount brokerage, he is able to get a sense of the customer experience but also compare what the discount brokerages report on their answers to the survey questions.  According to Carrick, it is not uncommon for some discount brokerages to embellish their offerings and features in the survey, so sifting out the marketing from the actual features can be tricky. All told, the process takes about two to three months to complete, and can involve a substantial amount of information to process.

How the Canadian Discount Brokerage Rankings are Structured

The reviews each year generally consist of two parts. The first part is the numerical “score” which is composed of scores on categories considered to be relevant to mainstream investors. The second component of the rankings is a commentary by Rob Carrick on his experiences with each brokerage.

Over the last 11 rankings, three “core” categories have consistently been measured:  costs, trading and tools.  These three components have collectively made up roughly 65% of the total score.   The remainder of the score (~35%) has been made up of various categories such as customer satisfaction, account information, website usability and most recently innovation.  The non-core categories have changed 7 times in the past 11 years.  For example, in 2008 “Account Information” made up 10% of the total score however in 2012 it now makes up 25% (which also happens to be the same weighting that “cost” has). 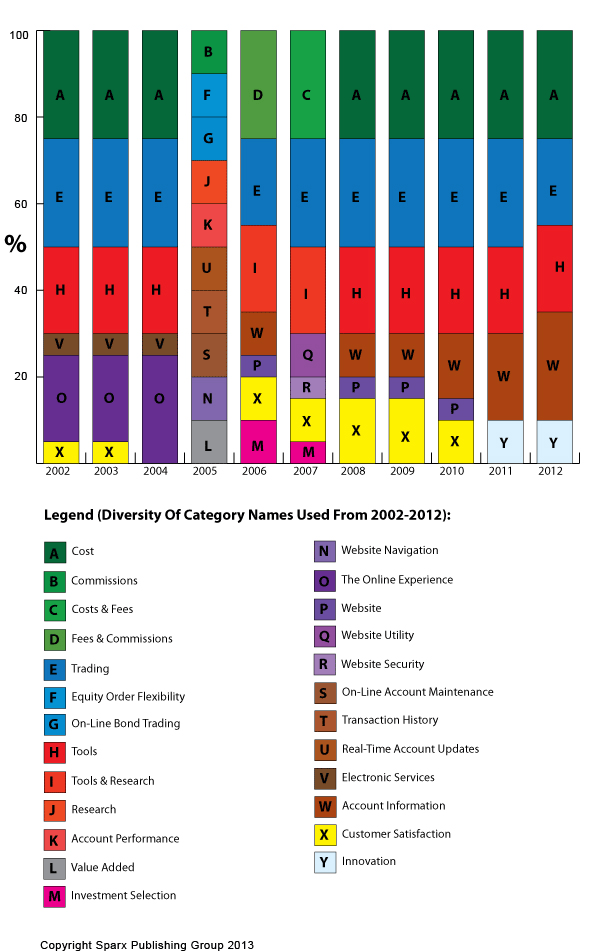 The consequence of changing categories is that there are some limitations on comparing results from one year to the next.  While the majority of the score (~65% or so) is comparable from one year to the next, a substantial portion of the score (~35%) changes fairly often.   If discount brokerages are very similar, and therefore likely to have similar scores, this level of variability becomes an issue because the difference a single percentage point makes in one year could be as a result of the ranking criteria changing not necessarily a change/improvement in the way a company is performing.

Alongside the “score” component is the more subjective commentary provided by Rob Carrick. The comments that make up this portion of the ranking description reflect Rob Carrick’s experiences while doing his research, what he thinks are salient points for readers as well his distinct commentary style.  The comments have evolved over time from a “pros and cons” style to more recently a high-level observation of each discount brokerage and what they might be planning for the future.

Who are the Discount Brokerage Rankings For?

The intention behind the rankings is to provide those new to investing and/or “mainstream” investors with a way of learning about what Canadian discount brokerages offer.  In addition to trading stocks, these rankings take into consideration products that many mainstream investors access, such as exchange traded funds (ETFs), mutual funds and fixed income products like bonds and GICs. Historically, these rankings have not really been geared towards “hyperactive” traders and as such issues like margin requirements/rates, execution speeds and volume trading discounts are not considered.

In part two of this series, we will go through what the rankings actually measure, tips on how to use rankings as well as some of the interesting findings we noted in looking across the last 11 rankings.