A convenient way to think about trading 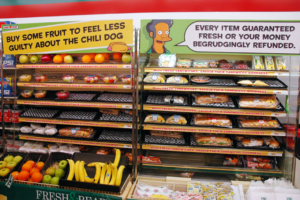 Let’s dive a bit deeper into the convenience store analogy. A typical convenience store doesn’t have a whole lot of room,  so the store owner has to figure out exactly what to put in the store, how much of it and what to charge so that he/she can stay  in business or even be profitable.  Overcoming the big challenges of what to sell, how much and at what price are the same challenges every trader faces when looking for a profit.

Getting the right mix of things is a challenge.  For example, a lot of people may buy milk from a convenience store so naturally it makes sense for a store owner to have milk in their store.  If the store owner stocks too much milk however, there will be excess inventory that eventually could spoil and the owner could lose money. Too little milk and people will be coming into the store and leaving empty handed in which case the owner misses out on sales.

The next time you look at a price tag don’t be fooled – that price is just a good guess as to what you (the buyer) is willing to pay.   This leads to an interesting question – what if they guess wrong? The answer is simple – the merchant loses money.  If they have too much milk and realize they may not sell it on time, they can lower the price (i.e. put it on super sale) and their odds of cutting their losses get better. Of course the market for milk is very “liquid” (pun intended) meaning that there are lot of people who would likely be willing to buy milk.  Hula hoops, on the other hand, may not be such a hot ticket item. If they buy a hula hoop and nobody else wants to buy it from them, then the merchant is stuck with it.

Once a merchant figures out “what” he/she wants to put on the shelves, the next question is where they get the merchandise from. Probably from a much larger wholesaler, like Costco, who has much better pricing power and can buy in bulk at a discount. The merchant has to go out to a marketplace of some sort and try to get the best price on that milk or those hula hoops so they can make the most money when they sell it to one of their customers.

Previous Money Talks Insider Conference
Next An Intro to Markets

3 D’s to make you a better self-directed investor

Educational Resources to Learn About Investing in Junior Mining Stocks

Today I came across a great educational tool for individual investors curious about online investing.   …