Event Review: Global Economic Forecast – The World in 2013 and Beyond by HSBC Business without Borders

Vancouver was the last Canadian city to play host to the series Global Economic Forecast – The World in 2013 and Beyond that toured across Canada in November of 2012.  Put together by HSBC’s Business without Borders unit, this seminar featured perspectives on what is facing the world in both the immediate and not too distant future from two high-caliber speakers: HSBC’s Chief Economist David Watt and Director of the Waterloo Institute for Complexity and Innovation, Dr. Thomas Homer-Dixon.

The first session, presented by David Watt, was an overview of several economic trends and issues that he believes will be key drivers for business opportunities in the near term as well as for the decades ahead.  Among the topics covered were how the shortfall in oil production will influence the oil services industry and the potential impact of the “currency wars” being waged between central banks on the Canadian dollar. He also made a call on the forecast for the Bank of Canada to hold Canadian interest rates steady in 2013 in the face of the global economic conditions and actions of international central banks.

One of the most interesting portions of this talk came when David Watt referenced how global economies are expected to unfold into 2050.  As part of the report, “The World in 2050” prepared by HSBC Global Research in January 2012, regions such as India and China are expected to have substantial impacts on the rest of the globe’s economies, with the young  demographic profile of India being particularly interesting in the decades ahead.  Other economies that have been previously overlooked as areas of strong economic growth, such as Peru and the Philippines will also be areas to watch for opportunities.

The next half of the session was presented by Dr. Thomas Homer-Dixon.  This portion took a much higher level view of some fairly somber issues confronting the global community.  Echoing themes from his book, “The Upside of Down: Catastrophe, Creativity and the Renewal of Civilization”, Dr. Homer-Dixon  focused on the capacity of systems to withstand multiple shocks or what he called synchronous failures. Issues such as population growth, environmental change, energy shortages and economic shocks happening all about the same time form a perfect storm to destabilize current societal systems’ abilities to cope in times of crisis.  After presenting the daunting statistics about extreme weather events that are being forecast to occur and oil well decline rates for the much hyped shale oil wells, Dr. Homer-Dixon talked about the opportunities for innovation in the face of crisis.

The first innovation strategy is development of general purpose technologies in the energy sector which can alter how energy is gathered, stored, transferred or used. Given the immense challenges facing the world in accessing affordable energy, the type of innovation required is substantial and the need urgent. The second major strategy that can be employed is building resilience.  Of the many ways in which this resilience can be built, a particularly interesting one was to mitigate some of the connections in key systems that currently exist today that let things like “flash crashes” cascade as quickly as they do. As a civilization it appears that humankind has a struggle ahead to properly reign in its own capacity for “innovation”.

Overall this event was a great opportunity to get exposure to some unique perspectives about the possible directions the world may head in and the reasons why it might go there.  While ‘predicting’ the future is always a tricky exercise, especially when looking so far into the future, going through the evidence and arguments is genuinely value added, especially when ideas for innovation are linked to possible investment themes. When most of the financial media is fixated on reporting momentary fluctuations in markets and politics, it is refreshing to take a step back and look out to where the longer-term trends and megatrends are pointing our society.

In addition to the complimentary admission and breakfast, and some great speakers, organizers gave out some serious food for thought as a bonus for attending the session:  audience members received free copies of the World in 2050 report by HSBC as well as the book by Thomas Homer-Dixon, “The Upside of Down: Catastrophe, Creativity and the Renewal of Civilization.” 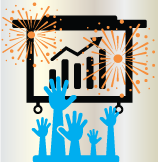