While many have heard the saying ‘money never sleeps’ apparently money is also willing to blow off a spectacular spring day in Vancouver. Such is the sacrifice that die-hard investors were prepared to make as they attended the spring edition of the 2014 Vancouver Small Cap Conference. Following the Recipe As with conferences past, this […] 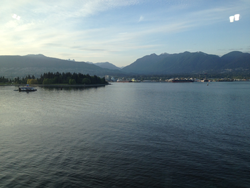 While many have heard the saying ‘money never sleeps’ apparently money is also willing to blow off a spectacular spring day in Vancouver. Such is the sacrifice that die-hard investors were prepared to make as they attended the spring edition of the 2014 Vancouver Small Cap Conference.

As with conferences past, this conference followed a familiar format. The dance card featured 3 guest speakers and 7 company presentations providing investors and attendees with tips and ideas on investing in the small cap space. In keeping with tradition, there was also a frenzied refreshment break (a great lesson on supply & demand) and the usual prize draw to conclude the evening.

While the structure of the event was familiar, what stood out this time around was that almost all of the speakers were actually able to keep their presentations to the allocated time. It sounds trivial, but it was a big factor in making the night run smoothly.

For those that want to access the slide presentations for the show, they will be made available here in the near future.

Another noteworthy feature about this year’s conference was the diversity of investing ideas put forward by the companies in attendance. Even though Vancouver is typically ‘mining focused’ when it comes to investment conferences, there was a surprising variety in the presenting companies at the conference.

Here is a sample of the kinds of sectors or areas in which the presenting small cap companies were active:

In addition to the company presentations, one of the big draws for the conference was to hear the guest speakers provide their tips and insights on investing in the small cap space as well as to hear some of their suggested picks.

The three guest speakers at the conference included:

Here is a quick highlight reel of what each had to say:

As the lead-off speaker, Brent Todd provided an overview of some of the big winners picked from conferences past in an effort to drive home the point that investing in small caps can be a lucrative exercise if done right.

For many investors, the sting of the financial crisis was enough to keep them out of stocks and especially out of junior companies. For Todd, however, the primary focus of his strategy has been reward and then managing risk and junior companies offer an attractive landscape in which to discover portfolio changing opportunities. He then offered up 8 points to explain his perspective on small cap investing.

Among the most interesting of the points was his opinion that small and microcap companies are often more reasonably valued than large caps and that financial statements for smaller companies are typically easier to follow than for much larger companies.

Both of these points underscore the importance of being able to do the research on companies and to be able to assess value – something that professionals and retail investors need to do in order to invest intelligently. In closing he offered up a ‘pick’ on Titan Logix (TLA on the TSX-V) as an interesting name to watch. 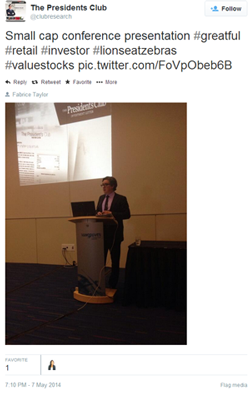 Financial journalist and publisher of the President’s Club Investment Newsletter, Fabrice Taylor gave a much higher level of the value of the market place and the role of investors and brokerages.

In a nutshell, Taylor’s presentation positioned retail investors as ‘zebras’ and professional traders/brokers as ‘lions’ with the take home message being: if you’re not a lion, you’re a zebra.

It was an interesting take on the classic struggle between the little guy and the big players in that Taylor stated if the “zebras” work together, they can certainly get the lions to think twice about attacking.

Animal metaphors aside, the message that stood out from his presentation was “you’re gonna make a lot of money if you’re right” which, as any investor knows is much easier said than done.

As a value investor, Ryan Irvine has consistently provided a well-reasoned approach for highlighting the kinds of companies that make for interesting investment opportunities.

At this particular point in the markets, however, Irvine made it known he was finding it more difficult to find “good” opportunities – a signal that perhaps valuation levels are getting less attractive. Nonetheless his one ‘pick’ to watch was High Arctic Energy Services (HWO on the TSX).

With the caveats about the current market in mind, Irvine offered up 5 tips for investors interested in ‘growth’ stocks:

Like its predecessors, this edition of the Small Cap Conference stuck to its tried and tested recipe. For those interested in small caps or even thinking about small caps, conferences such as this one provide a unique opportunity to see how seasoned veterans in this space approach what many view to be an incredibly risky set of companies. We look forward to catching the next edition when they are back in Vancouver in the fall and watching the performance of the picks in the meantime.